How You Are Being Fooled And Looted By Reliance Communications 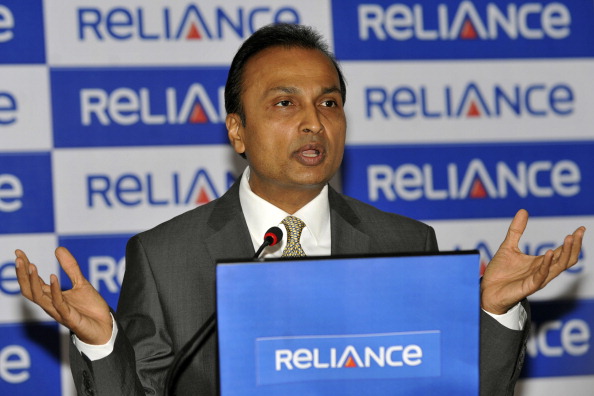 Did you see the recent ad campaign of YouTube specially targeted for Indian market. Here is it for you if you missed it. So why is it that India being good at all development fronts but lag on basic internet speed. We are struggling to get a decent speed of 4 5 mbps when our neighboring countries are enjoying a whopping speed of over 100 mbps. Does it has to do anything with our service providers? Yes, of course! The price you are paying for your current plan gets you a 10-12 times more speed in USA.

I am writing my past one year experience with Reliance Communications. I opted in for 1 mbps unlimited internet services in July 2014. As days passed, I started facing speed issues. But I neglected this issue because I was using it alone and so I did not feel much issues. The problem started getting worse after 3 4 months when the speed started deteriorating  further. And even after countless complaints, I did not get proper resolution of the solution. And then Doomsday of Reliance came in February somewhere around 10th. The internet connection stopped working. I made around 7 to 10 complaints in 2 weeks. But the issue did not get resolved. So, I asked the customer care guys to terminate my connection and I opted for other service provider.  After few days of making termination request, I started getting calls from their retention team saying to reuse the service to which I denied because I had already started using other service provider. To my surprise I got billed for February and March month. now, this was really too much. So, I called customer care asking why did they send 2 months bill when I was not using their services. You will be amazed to know their answer. They told the service is in suspension mode and it has not been terminated. When I asked why, they told this is not in their reach. It was done from backend team. I again told them to terminate with immediate effect to which they told they were taking termination request and will be done soon.

After 3 4 days I got a call from Reliance retention team asking why I was terminating the services and I explained them the whole story. They promised that The bill will be waived off if I will resume the service to which I happily agreed as I was billed heavily with other service provider and also, they had very strange funda of day and night usage + after the usage is over the speed dropped shamelessly to 32kbs.  The guy told I will be getting intimation once the services are resumed. But I did not get any call or message for over two weeks. Then I called customer care again asking that I was told that service will resume but it has not been resumed yet and I  had not got any intimation regarding this. And now this was frustrating to hear. They said it has already been resumed on 22nd April. I asked them why did not I get any intimation regarding the service resumption. They had no answer. And when they don’t have any answer they will either pretend that they do not understand what you are talking or pretend that they are not able to listen you or hang up on you. So again next month I was billed for more than 45 days out of which I had only used 10 12 days. The service was resumed at my end on 11th May when their service engineer came to reconnect the disconnected wire.

Now, is this something you did not understand? No! Right. But this is difficult for Reliance to understand this language. Either we are from Mars or they are from Pluto. Have a look at these funny conversations on Twitter where you will see how idiotically and nonsensically their social media team respond. They have only two answer of every question.

@RelianceMobile ur cust care guys dont even read the mails. They nly answer sorry for the inconv. ur connectivity issue ll b rslvd in 24 hrs

Here are few email conversation which proves that they pretend to be idiots so that you pay the extra bill because you are in need. And 50-100 rupees wont make much difference. But this time they have crossed the limits and I had to pay almost Rs 800/- extra which they had told that will be adjusted in the next month bill. I have got the bill again and I don’t see any adjustment. When I called them and asked for clarification, they say because you did not make any complaint from 22nd April to 10th May, you are not eligible for waiver. So my question to Reliance is, till when you will be looting us? Enough is enough. Even your Appellate authorities do not understand English. Lastly I will say either work properly or shut your shop. We are not fools. 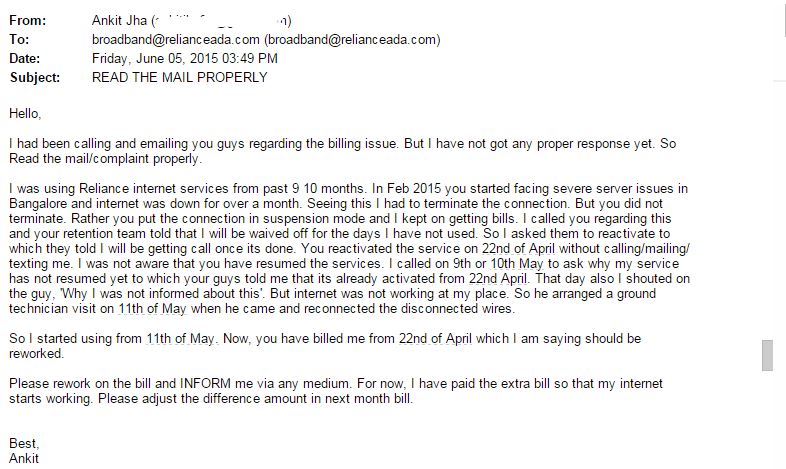 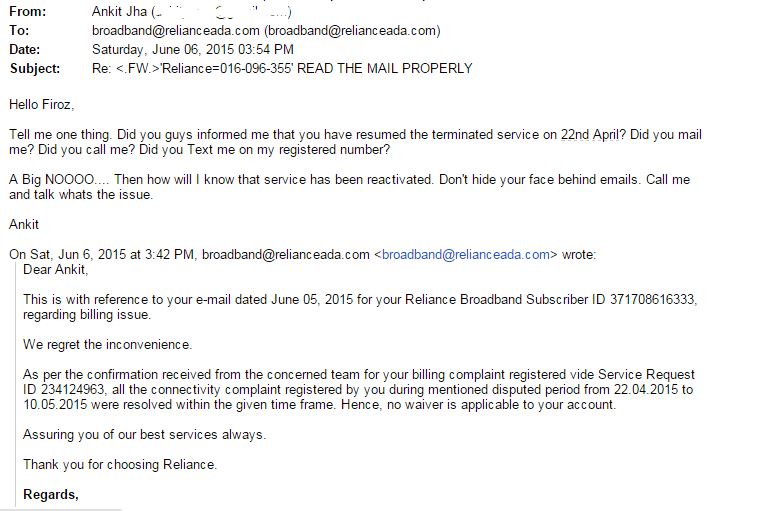 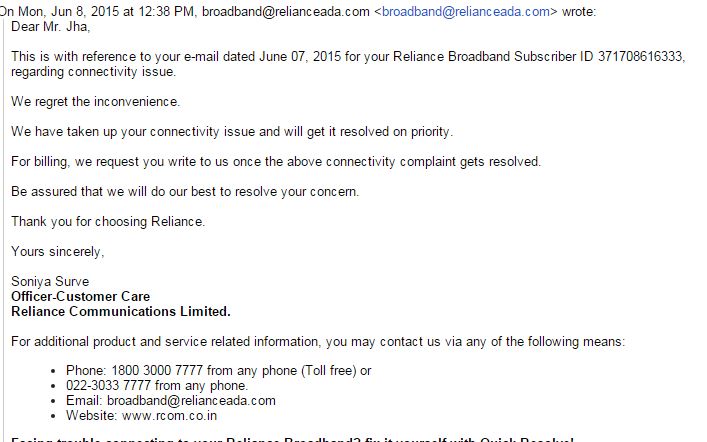 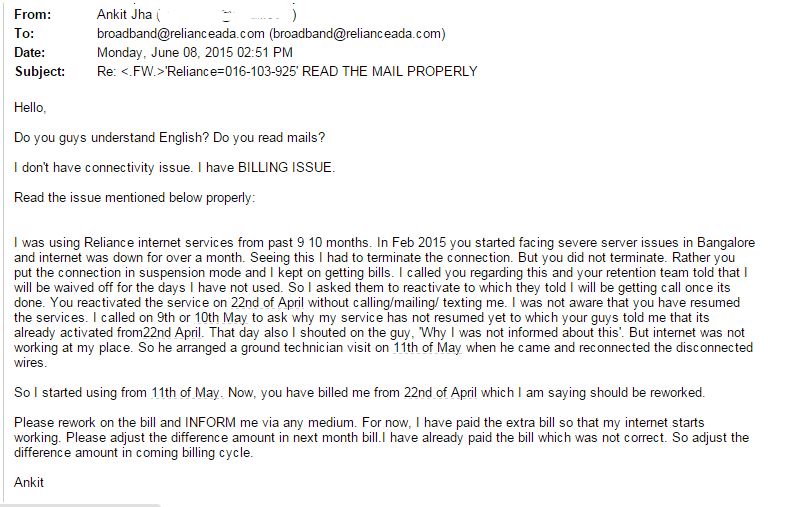 Above are few of the mail conversations with the support team who have same answers to every question. After countless mails, I guess they read my mail and replied that waiver is not possible because there has not been any complaint registered for those days. Now is this so hard to understand that why will I complaint if I was not using your service on those days and because of their faults? They message 4 5 times when a payment is due. They call twice a day. But why don’t they call when they have to intimate you. I guess, its all planned game where they act like idiots to make us fools and keep earning extra bucks in each billing cycle.

Assume, Reliance has 20 lacs customer in India( The real number will be way to high) and if they are making even Rs 50 extra from each one of them. Then they make 1 crore extra revenue by cheating their customers.

And one of the ridiculous policy I have ever came across is you are not eligible for waiver unless your system is not working for more than 72 hours continuously. So, it does not works for 71 hours and start working after that, works for another 2 3 hours and again does not work for 71 hours and cycle goes on and on…You are not eligible for waiver even if its their fault. Can TRAI look into this. Isn’t this a silly policy?

And now even Reliance joined the herd with Tikona in making fake calls pretending to be lawyers. Here is a link to one such report.

Do share it with your network if you have been victimized ever by them so that it reaches to deaf and dumb officials of Reliance and they get to know that we understand their catch.

PS: I am writing this blog using my mobile data in absence of internet service of Reliance  and again another complaint is registered which they don’t give a shit about.