How I Contested Case Against MTS And Won It 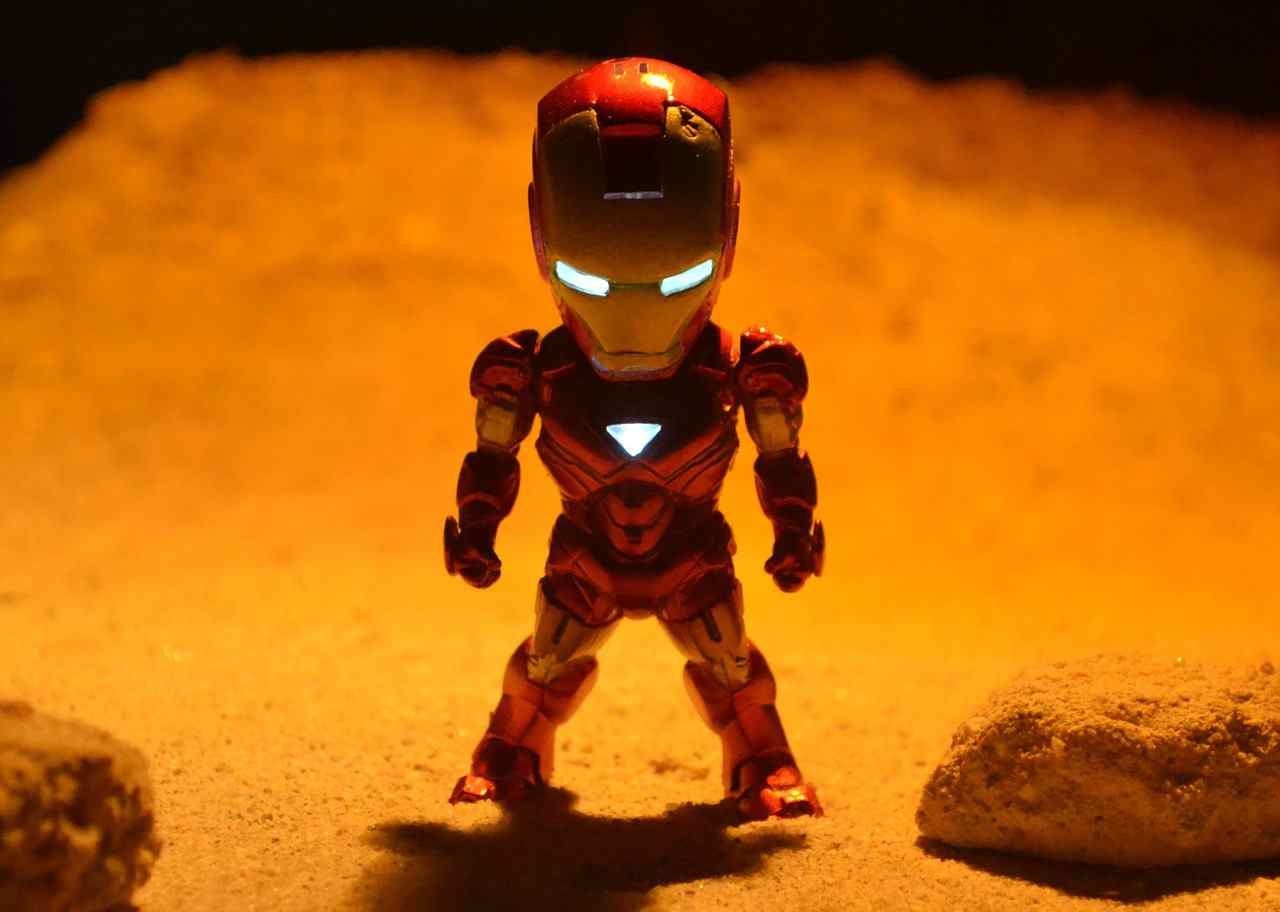 When you accept and embrace your fear, it becomes your weapon.

People take advantage of you when they know your fears and you loose the game before you play. Something similar happened a couple of  days back when I was aware of my fears and had embraced it which helped me to win over my opponent.

It all started in February 2016 when I bought an MTS MBlaze with a postpaid plan of INR 999 where I was promised 40GB at high speed(upto 10MBPS as I remember) and 32KBS after 40GB of consumption. One of my friend had taken the same plan earlier to me and had alerted me that they change the plan into 20GB day and 20GB night. Being aware of this bluff, I specifically asked the executive that there should not be any day/night concept to which he had agreed. After a week’s usage, the speed drastically came down to 32kbs which was not even enough to browse the Google’s homepage. I called the executive and asked that he had promised that there will not be anything like this. He apologised and asked me to mail some documents and assured that the plan will be changed to what he had promised. I emailed him the asked documents and mentioned the conversation we had over phone so that I have it as a proof if he ever tried to retract. Power of documentation, you know. 🙂

The plan did not change for days and my work was getting hampered so I had to find ways. MTS had plans to get 1GB of data usage at high speed which you could use when you have consumed your high speed data. I opted for this speed booster plan in a hope that the plan will be changed in few days. I kept contacting the executive over email by looping in their senior officials. I also tried to contact the guy over phone which he kept ignoring. Aggrieved by this, I emailed MTS Appellate Authority  with the email conversation I had with their executive. And to my dismay, I got an email which said that the plan what I had got was correct. I kept trying to bring the plan I was promised by their executive to their notice but to no avail. Frustrated with their pathetic support, I gave up on them and mailed them that I will stop using their service and not pay any single penny if the plan is not changed to what I was promised. And eventually I stopped using MTS services and changed to another ISP in April.

Just a month later I was billed eve after I did not use the services and I did not give a damn about it. I was billed again in the next month and the total outstanding amount due was being shown as INR 2140. I kept getting emails regarding the due billed amount which I kept ignoring as I had already informed MTS guys about the whole incident and they had done nothing to resolve that. After few days I started getting text messages and phone calls disguising as lawyers and judges of High Court and Supreme court. As I had previous such experience with Tikona, I was unperturbed with that. I kept getting calls and emails which said that they are issuing Legal Notice/Non Bailable warrant and what not 🙂 . I firmly replied such calls and asked them to do whatever they want and not call me again else I would register a complaint against them and MTS as well.

And Then They Crossed The Limit: 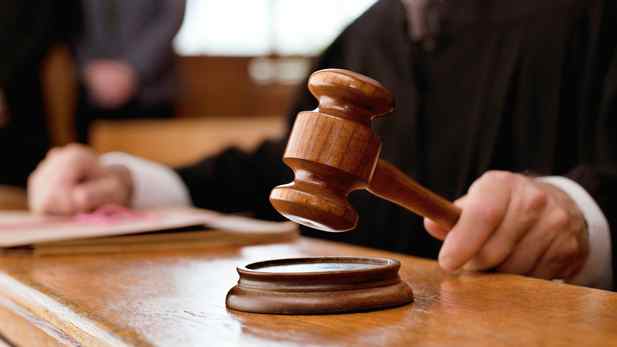 I got an email on 3rd October 2015 which read that I had to appear before the authority In City Civil Court on 15th Oct 2015 as MTS had filed a Pre Litigation Case against me. I was disturbed a bit because I had never been to court or jail and was fearful of these stuffs. I am sure you would have also thought and reacted the same way as I did because most of us do not want to get involved in these legal hassles. And our this fear becomes their weapon. They take advantage of our fear even if they are at fault. I did some research and talked to few of my friends who are lawyer. I found out that Lok Adalat/PLC are only for compromise between two parties and you need not hire a lawyer for that. You can contest your own case. I thought of having one experience of court by visiting on the date given. I printed all email conversations which was evident that MTS was at fault; and went to the City civil Court. I was not alone. There were over 30 people with the dispute with MTS, Airtel, Vodafone, Reliance and many other companies. But out of the people present only 3 of us wanted to contest our case and rest were ready to compromise and pay whatever amount company was demanding. I wanted to have the full experience and thus went through the whole procedure. I and other party sat across table in front of the presiding officer and the conciliator. I put my point and plea with the evidences which the officials heard very carefully. The officials asked the MTS guy to settle the matter to which he told that he will pull up the details in a day and will call me the other day. I took Mr Raghvendra’s number and went home in a hope that he will call the very next day and it will be settled. I did not get any call/email for a week. And during this period I kept calling Raghvendra which he ignored. I thought that matter was over as I had visited Lok Adalat. nothing happened for around next 3-4 months. 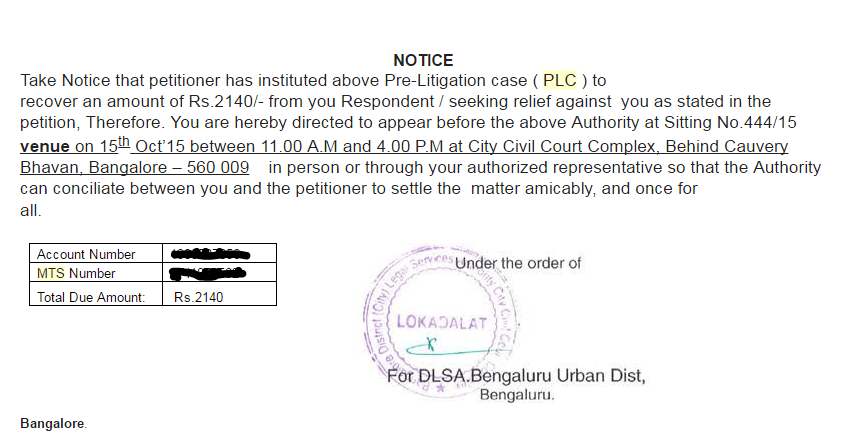 MTS guys are so shameless that they started the same episode. I again was getting extortion calls, messages and emails disguising as advocates and judges of Supreme Court and High Court. I was firm on my stand and told everyone who called to do whatever they wanted to do. I got a similar email on 9th November which said that MTS has filed a Pre Litigation case against me to recover the due amount. Either I pay the amount or be ready to face the court. I was angry this time because of their stubborn and irritating habit. I took printout of all evidences be it email or Twitter Interaction. 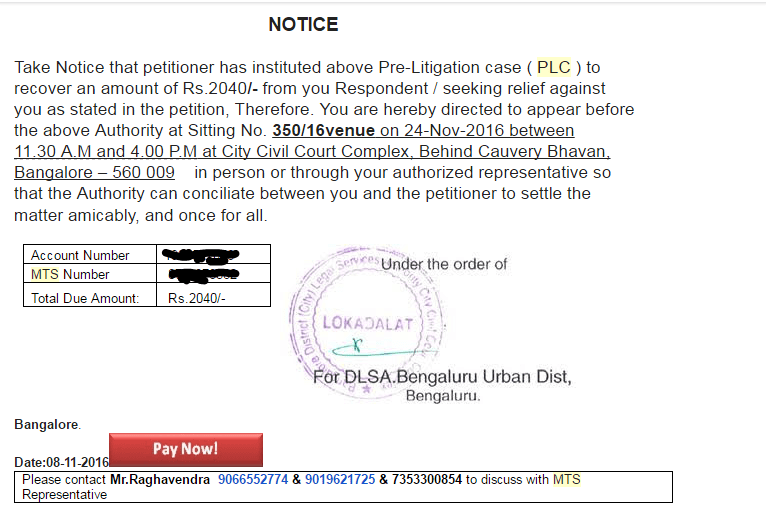 @MTS_India If you cant serve your customers well, shut your biz. How can your cust exec hung up on me.

@CPBlr and @BlrCityPolice I am getting extortion calls from @MTS_India from past 2-3 months. Could you please intervene.

I had informed Mr Raghvendra via email and over phone 3 days prior to the date. I told him that I either want him or any senior official from MTS and not any representative or collection agent. MTS guys do not want to face us directly because they already know that they are at fault. When I visited the venue on 24th November, I found out that Mr Raghvendra was not there. I called him and he did not pick up. I asked his representative to call him and ask him to come as I had already informed him 3 days prior to the date. I was told by MTS representative that Mr Raghvendra was in Davangere and was unable to come. I asked the conciliator to direct the representative to call Raghvendra and ask him to come. The representative was adamant and said Raghvendra could not come. Seeing his behaviour,  the conciliator asked us to appear before the presiding officer. Below are the points which I put before the official:

The MTS representative called Mr Raghvendra and told him all of these. Afraid of cyber complaint and compensation amount if I approach Consumer Forum, MTS found it easy to close the case and agreed to sign the NOC. This is how documentation learnt at my company came to my rescue and it was a cakewalk to win the case in favour. Do share if you have any similar experience.

If you are facing any such situation, I am ready to help you. Please message me your whole issue via my Contact page. I am also working on Education Loan Subsidy cases where customers are being harassed by banks. If you have any such case, please do contact me via Contact page with the detail.